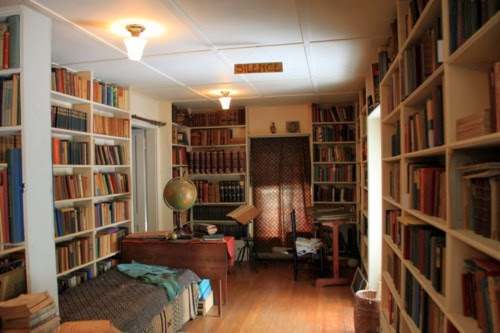 When my mother and I first entered the library at Steepletop in 2010, the first book I saw was Ulysses, lying flat and nonchalant upon a table as though it had a perfect right to be there. “!!!!” I thought, though “thought” is not the right word for that moment of éclat. It would be difficult to think of two writers more different than Joyce and Millay, though of course they were near contemporaries; the only thing more astonishing than seeing Ulysses in Millay’s library might be seeing A Few Figs From Thistles in Joyce’s.

The rest of the Steepletop library created almost as great an impact on me, though mostly for its volume of volumes. It’s rare for a writer’s personal library to remain posthumously intact, and even rarer for the books to remain in the very place where the writer read them. Looking at them, I had a thought that did manifest in actual words: “This should be a database.” I therefore wrote to Peter Bergman, then executive director of the Millay Society (which operates Steepletop as a historic house museum), and he put me in touch with retired librarian Maureen O’Connor, who with other volunteers had begun to catalog the books at Steepletop. Maureen provided me with the initial 1950 inventory of books given to her by Millay’s one-time literary executor Elizabeth Barnett and, later, the set of index cards from the more recent (daunting) effort to catalog the library. I spoke briefly about the project, and about some initial conclusions I had drawn from my work entering the data and building the online catalog, on a panel at the Modern Language Association in January of 2014. After several years of on-again off-again work, we do now have a provisional online catalog that lists over 1200 works available at steepletoplibrary.org.

Much remains to be done, however. The initial typed inventory of 1950 appears to lack some pages, and in any case it lists only authors and titles, lacking all edition information. Since Steepletop first opened to the public in 2010, volunteers have quite rightly focused on other efforts than the catalog, and so the card index is also incomplete. But more urgent even than ensuring that the books properly cataloged and described is ensuring that they are preserved: Steepletop lacks climate control. The Millay Society has therefore launched a fundraising campaign to save Millay’s library at Steepletop by raising money to install an HVAC system to keep the books in good condition.

In support of these efforts, I have undertaken to write a few brief squibs about some of the books in the library at Steepletop while the fundraising campaign continues, using the “Exhibits” feature of Omeka (which is the platform for the catalog) to feature some interesting works. I’ve started with a few books by prominent modernists, including that very Ulysses that first grabbed me. Pardon the emphasis:

See the exhibit on Modernist Books at Steepletop Library

There are probably swathes of information about Millay’s relationship to these and others of her books in various archives, in the attics at Steepletop, or in the margins of the copies themselves, but I haven’t yet been able to explore these beswagged chambers of potential knowledge; these hasty efforts are provisional drafts that I hope to revise in the future. But in any case, to me the significance of a library like this isn’t only what the books say or imply about Millay and her works, but also what the books reveal about their historical moment: they are “a way of happening, a mouth”, things that have survived that are worthy in themselves of consideration. I’m enjoying researching them, and whether you enjoy what I write or not, I hope you’ll consider contributing to the campaign and passing the word along to others who might also contribute.